Anadrol was first developed in the 1960’s by Syntex Pharmaceuticals as means to treat anemia and muscle wasting diseases. As is common with many medications designed for this purpose, Anadrol would soon find a welcomed home in the performance enhancing world. This can easily be seen as this particular anabolic steroid is comprised of the drug Oxymetholone which readily promotes weight gain by increasing appetite and red blood cell count, as well as increasing strength. However, there is an interesting note, too much Anadrol can seriously reduce your appetite and make weight gain very difficult; after all, if you can’t eat you can’t grow. 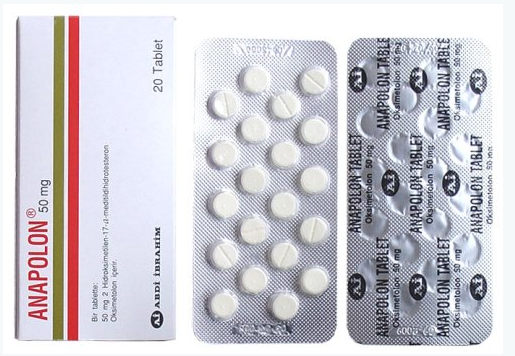 Oxymetholone, commonly known as Anadrol due to the first manufactured name of the steroid is derived from Dihydrotestosterone (DHT) and is a 17-Alpha-Alkylated steroid (17-aa.) The 17-aa alteration simply means the steroid has been chemically altered at the 17th carbon position to allow it to survive ingestion by surviving the first pass through the liver; without the 17-aa alteration the steroid would be destroyed before it ever entered the blood stream. The good news is by this alteration we are able to absorb a usable and powerful anabolic steroid; the bad news is this is toxic to the liver. As most oral steroids are 17-aa the toxic effect can be quite high but as it pertains to Anadrol this effect is more pronounced making it one of the most liver toxic steroids on the market.

Once Anadrol enters the body, which is allowed by its 17-aa form it will become active very quickly and the effects will be dramatically fast. As we understand anabolic androgenic steroids the half-life associated with them largely affects the initial potency; Anadrol has a very short half-life of approximately 8.5 hours making the steroids activity almost instant but with a very short active duration. For this reason many athletes will split their Anadrol dose into two doses per day in order to keep a peak amount of the steroid active in their system around the clock during periods of use. However, one dose per day will be enough to keep an active amount of the steroid functioning in the body, although not at peak levels.

The Benefits of Anadrol:

As a steroid designed to treat weight deficiency and muscle wasting disease this is one of the more prominent bulking steroids we can use for a bulking purpose. While many anabolic steroids can serve both bulking and cutting purposes most have a primary role and Anadrol makes no exception. There is one purpose for Anadrol while on a cutting cycle and we will touch on it as we go but for the majority of steroid users bulking and only bulking will be the only time they use this steroid.

With its immense power, Anadrol is one of the most powerful oral steroids ever made, individuals can see their weight increase by as much as 20-30lbs in a mere few weeks of use as well as see their strength shoot through the roof. Further, as this steroid is almost always used as part of a stack and not alone, due to its low androgen binding characteristics it will allow other steroids you are taking to more aptly fill this role and more or less create a higher level of synergy between the various anabolic androgenic steroids you are taking.

The Side-Effects of Anadrol:

As we have discussed, Anadrol is very taxing on the liver and will raise liver enzymes far beyond optimal levels when consumed. However, with responsible use serious damage is largely avoided as the liver possesses amazing healing properties and will normally return to its original state once use is discontinued; assuming we use responsibly and assuming our liver is healthy to begin with. Even so, liver toxicity is not the only negative downfall of this steroid; there are estrogenic related side-effects. Most steroids that carry these potential side-effects do so by converting to estrogen via the aromatase process but Anadrol as a DHT based steroid does not aromatize. However, although it will not convert, Anadrol has been shown to effect estrogen release in the body in a manner of increasing it and for this reason precaution is advised. Negative effects such as Gynecomastia and high blood pressure can all occur due to this effect as can water retention, which is notorious with this steroid. For this reason, most athletes will supplement their use with an Aromatase Inhibitor (AI) such as Arimidex or Letrozol in order to keep the effects at bay; both of these AI’s have been shown to greatly reduce estrogen in the body.

It is easy to see why this steroid is perfect for bulking as its attributes lend to this end and because of these very attributes very few individuals will use Anadrol during a cutting cycle. However, there is an exception and quite a large one in competitive bodybuilding. Many competitive bodybuilders will supplement with Anadrol the last few weeks before a show; by building up a large amount of the steroid in their body over a period of weeks they are able to make greater use of their carb up at the end. Through this process the competitor will possess a much fuller look but again, caution must be applied. An individual who is very sensitive to water retention from this steroid will need to stay away from this process but if ones diet is on point and such sensitivity is not a problem, coupled with a good AI and solid contest cycle a nice full effect can be gained.

Anadrol almost always comes in 50mg tablets and the most common dose is simply 50mg per day. While 50mg per day will prove to be very effective 100mg per day is not uncommon; however, 100mg per day will prove to be the most anyone would ever want to take if they desire to remain in a responsible realm. It should be noted that Anadrol does not carry the same risk to reward ratio most other anabolic steroids do. This risk to reward ratio revolves around the dose and benefits of a particular steroid; meaning, the more you take the greater the results but the more you take the greater the risk of potential side-effects. Anadrol has been shown to really taper down in-terms of benefits once doses start going much past 100mg per day and this negative reaction can start to occur at doses over only 50mg per day in some individuals. What this means is an extremely high dose of Anadrol will typically not yield better results than a lower more optimal dose; the only effect will be a higher level of liver damage.

The majority of Anadrol users will find their use of the steroid do be best suited for bulking cycles but only for part of the cycle for shorter periods of time than the total cycle itself. 4-6 weeks is a good rule of thumb as going past this point will not only cause undue stress to your liver but the benefits of the steroid will start to fall when you extend past the 6 week mark. The most optimal time to use this steroid will be the first 4-6 weeks of the given cycle and most will find Anadrol stacks very well with testosterone of any form with additional Deca-Durabolin for those who are really looking for a punch.