The two major forms of calcium are calcium carbonate and calcium citrate. Calcium supplements are intended to be consumed with a meal, and when taken as directed, the two forms of calcium are absorbed at roughly the same rate. However, when taken on an empty stomach, the body has a much easier time absorbing calcium in its citrate form vs. its carbonate form. Calcium lactate and calcium stearate are two alternative forms of calcium. Calcium lactate is expected to have similar effects as calcium citrate. Calcium stearate is used as a food additive. It is expected to be minimally active, and is actually not added to products for its calcium content, but rather for manufacturing purposes as a carrier or binder.

Calcium carbonate is an inexpensive OTC product that can be found in antacids such as Tums. Calcium citrate is the 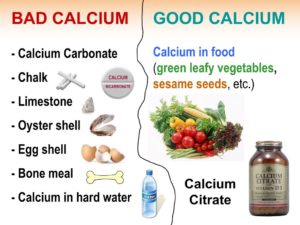 more expensive option, but it works well on both an empty stomach and with food, and can be taken at any time. This is also a better option for elderly folks, since they tend to have less stomach acid to absorb the product.

It is preferable to take the low-calcium supplements (500-600mg) over their larger-dose counterparts (1000mg) because the smaller pills tend to get broken down and absorbed faster than the bigger pills. Vitamin D is required for absorption of calcium into the bones, so one should also make sure that they are getting an adequate amount of Vitamin D either through diet, supplementation, or from exposure to the sun.

The takeaway: if you plan on taking the supplements with a meal, go for the cheaper calcium carbonate option. But if you often forget to supplement at mealtimes or are regularly taking the calcium on an empty stomach, go for a product containing the citrate, acetate, lactate, or ascorbate form.