When it comes to a pound of muscle versus a pound of body fat, gym myths abound. Muscle is more metabolically active than fat, meaning it burns more calories when you are at rest, but the level of this activity often is overstated. Another common statement, that 1 lb. muscle weighs more than 1 lb. fat, brings smiles to exercise physiologists who point out that 1 lb. is 1 lb., regardless of what it’s made up of. Still, pound for pound, muscle does take up less space than fat.

Muscle is denser than fat, which means it takes up less space than fat. While you may have heard that muscle takes up one-third the space of fat, the truth is a bit less dramatic. Muscle takes up approximately four-fifths as much space. Two people may be the same height and weight, but the person with a higher body fat percentage will wear a larger clothing size.

Since it is denser, muscle does weigh more than fat if you compare same-size portions. On average, the density of fat is 0.9 g/mL. The density of muscle is 1.1 g/mL. Using the averages, 1 liter of muscle weighs 1.06 kg, or 2.3 lbs., while 1 liter of fat weighs .9 kg, or 1.98 lbs. This may vary due to numerous factors including race, being extremely lean, or being extremely obese, according to “Exercise Physiology” by William D. McArdle, et al. 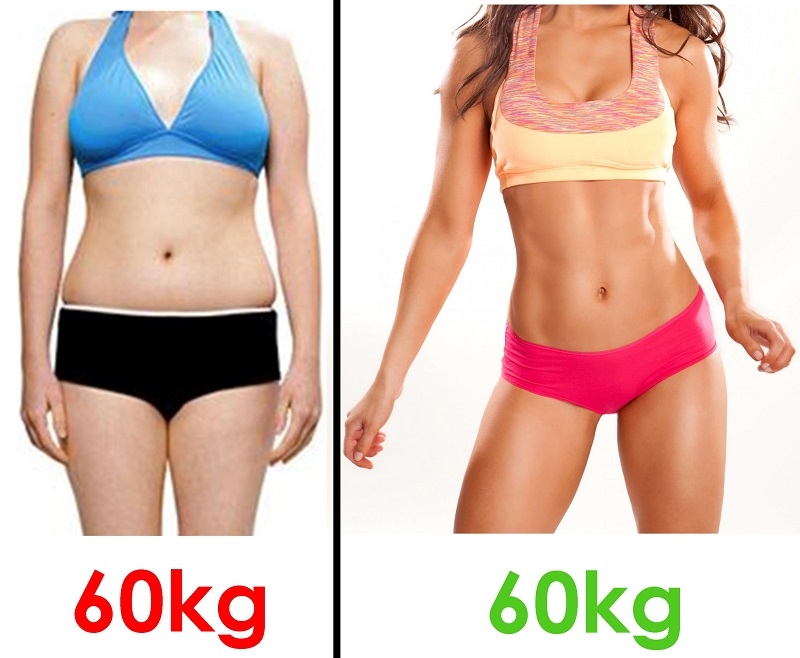 Common gym lore says that 1 lb. resting muscle will burn 30 to 50 calories daily compared to fat, which burns no calories. The truth is that muscle tissue will burn seven to 10 calories daily per pound. Fat burns two to three calories daily per pound. Replacing a pound of fat with a muscle, therefore, helps you burn an additional four to six more calories each day, says Cedric X. Bryant, chief science officer for the American Council on Exercise. If you utilize a strength training regimen, you can expect to gain 3 to 5 lbs. of muscle mass in three to four months, bringing your net caloric effect to 15 to 30 calories per day. The best way to benefit from the calorie-burning potential of your muscles is to actually use them. Your basal metabolic rate, or the number of calories your body uses when you are at rest, typically accounts for 60 to 75 percent of the calories you burn in a day.

Though swapping fat for muscle might not raise your basal metabolic rate as high as gym myths indicate, it’s still a good idea to stay lean. High body fat percentages are associated with raised risk for obesity-related diseases like type 2 diabetes, heart disease, high blood pressure, breathing problems, gallstones and certain cancers. For optimal health, the best body fat range for women is 18 to 30 percent. For men, it’s 10 to 25 percent. You are considered obese if you are a woman and have more than 30 percent body fat or if you are a man and have 25 percent body fat.