Simply put, congitive dissonance theory states that when you have two opposing ideas (or ideologies) at the same time, you will act upon the one that causes the less distortion to your ego.

“The Narrative Paradigm is a theory proposed by Walter Fisher that all meaningful communication is a form of storytelling or giving a report of events, and that human beings experience and comprehend life as a series of ongoing narratives, each with its own conflicts, characters, beginning, middle, and end. Fisher believes that all forms of communication that appeal to our reason are best viewed as stories shaped by history, culture, and character, and all forms of human communication are to be seen fundamentally as stories.”

People tend to seek consistency in their beliefs and perceptions. So what happens when one of our beliefs conflicts with another previously held belief? The term cognitive dissonance is used to describe the feeling of discomfort that results from holding two conflicting beliefs. When there is a discrepancy between beliefs and behaviors, something must change in order to eliminate or reduce the dissonance.

Psychologists refer to this vulnerability as the “willful suspension of disbelief,” where one can easily see the potential manipulations and evil motives of the perpetrator or perpetrators, but, because they have already made some prior committment to go along with this, it is easier to continue than to back out.

“Well put and explained! Unfortunately, most people have no idea that this is happening – that’s why it is so easy for propaganda, from commercials, the main stream media or governments to be accepted – hook, line and sinker. They swallow it whole.

It takes a logical mind to block this stuff, and logic is no longer taught or encouraged. Circular thinking seems to be all the rage – it allows for justification of whatever action a person may take.

In psychology, cognitive dissonance is the excessive mental stress and discomfort experienced by an individual who holds two or more contradictory beliefs, ideas, or values at the same time or is confronted by new information that conflicts with existing beliefs, ideas, or values. This stress and discomfort may also arise within an individual who holds a belief and performs a contradictory action or reaction.

Leon Festinger‘s theory of cognitive dissonance focuses on how humans strive for internal consistency. When inconsistency (dissonance) is experienced, individuals largely become psychologically distressed. His basic hypotheses are listed below: 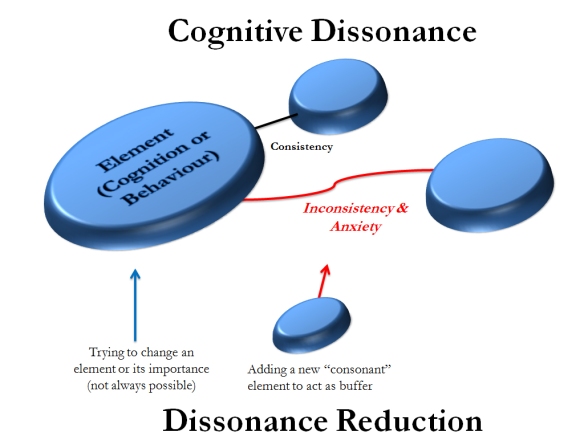